Rape is no entertainment: German TV as negative example on how to portray sexualized violence

About a year ago an episode of the German TV show Tatort (Crime Scene) called my attention to the problematic role sexualized violence plays in our national television programs. Only a few weeks later, the miniseries Ku’damm 56 confirmed my first impression of the trivialization and voyeuristic depiction of rape in our TV shows and movies. In the first of three episode, we already have to witness several cases of sexualized violence. In the last one however, the heroine enters a consensual sexual relationship with the exact same guy who raped her in episode 1. You might think this is absurd, but the selection committee of the Grimme Preis, one of the most important German TV awards, obviously thought this to be perfectly normal: They rewarded Ku’Damm 56 with a nomination for the Grimme Preis, which is by the way a prize intended to emphasize the educational aspects of German television.

Last year, the European Commission conducted a large EU-wide study on gender-based violence – with shocking results: one-third of all women* had experienced some kind of violence, more than 50% sexual harassment. One of 20 women* said they had been raped. Even more disturbing: a considerable proportion of the respondents felt that sexualized violence could be justified in certain situations, for example in cases of provocative clothing, intoxication and lack of counter-defense. And because this is so important I want to repeat myself: More than a quarter of all Europeans believe that rape is ok sometimes!

The problem here is that this general bewilderment does not reflect society as a whole. Therefore, unfortunately, we cannot present solutions right away. We have to explain the problem at first. People who create or evaluate film and television content must learn to question their own work in respect to (sexualized) violence against women. I am perfectly aware how difficult this is. During my time with the Grimme Preis, being the feminist voice of the selection committee, I had a very hard time convincing people to accept my arguments as being relevant for the discussion. I also had to listen to quite a few sexist jokes on my behalf. But I’m too dedicated to the cause to be silenced by mansplaining (maybe that’s why I had to leave the committee?). And you shouldn’t be either! We need to speak up and point people to the misrepresentation of (sexualized) violence against women whenever we see it in order to create a discourse and a general outrage. Not only in Germany, but in every society that struggles with this issue. Talk to your friends and colleagues, share this article with them, open their eyes. Because rape is not and never will be entertainment. Rape culture is a very serious problem that we as a society are responsible to resolve!

Read the full article on www.ewawomen.com 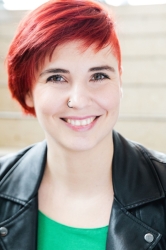