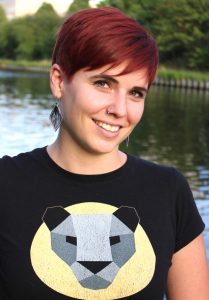 5. Filmlöwin in the German Press

This is the English version of the first German feminist film blog called FILMLÖWIN. I decided to start this project in German first of all because no one else did: While in the English speaking internet there were already plenty of websites dedicated to a feminist perspective on popular culture, the German speaking web was a bit slow in this regard. So in 2014 I founded FILMLÖWIN and in 2017, reacting to repeated requests in that matter, I started to translate a few pages and articles of the site into English.

FILMLÖWIN is a blog devoted to films by and about women *. Even in the 21st century, female filmmakers, cinematographers, editors, sound designers, and actresses are still affected by sexism and discrimination within their industry. By portraying these artists as well as their work, FILMLÖWIN wants to make „movie women*“ more visible.

The objective of any emancipation process is to avoid being „the other“ and to become an unquestioned part of the mainstream. Therefore I look at quotas as well as women*’s filmfestivals and even the idea of ​​this blog quite critically. However, a phase of dedicated promotion and visualization of movie women* is necessary to demonstrate the vast range of experiences and perspectives that we miss out on while we are looking at films with a „male gaze“ only.

Do you want to master writing skills in the shortest possible time?
Just click ukessays site and professional writers from this essay-writing service will teach you everything they know. Don’t lose your chance to be the best in your class.

A classic argument against the dedicated support of movie women* is that they would simply produce fewer films and accordingly be less present in the cinema, at festivals and in film promotion as their male colleagues. It is true that – as a consequence of discrimination within the industry – movies made by women are less visible. But they do exist! The fact that women* are underrepresented in almost all areas of film production (as in the film blogosphere, by the way) does not mean that they are not trained or interested in these jobs. It just means that women* rarely arrive in the spotlight! So I want to take the spotlight in my own hands and put it right at them!

In the past few years, I have written about the emancipation process of women* in front and behind the cameras. The backlash was enormous. But this didn’t make me doubt my enterprise and instead confirmed my belief that something had to be done.

FILMLÖWIN primarily focuses on ​​female* directed films. My professional attitude is essential here: the director’s gender doesn’t say ANYTHING about the movie’s quality or lack thereof. On the contrary, women* behind the camera deserve a criticism just as fair and brutally honest as their male* colleagues. Also in the end of the day, any criticism, whether positive or negative, is publicity making female filmmakers more visible. Besides reviewing female* directed movies, I present women in different branches of the movie industry by interviewing them and I write essays on gender roles in front and behind the movie cameras.

I also deal with the portrayal of the „feminine*“ in cinema. Not every movie about a woman* is of „emancipatory value“. To reflect on the part women play within cinema narratives, I discuss art house as well as blockbuster films. In these articles, I’m not debating whether or not a film is worth watching, but evaluating the film in it’s sociocultural context with a strong focus on gender politics.

Confronting patriarchy and sexism regularly leads to a specific kind of tiresome discussion that I don’t want to get involved in any longer. If you’re having any doubts on my work, maybe the following statements might help:

Are women in the film industry really discriminated against?

Discrimination against women is a fact. This blog is not supposed to prove the status quo, but to overcome it.

Why does FILMLÖWIN ignore sexist discrimination against men?

This is a blog about women* in front of and behind the cameras. I am very much aware that in a patriarchal society men experience discrimination as well, e.g. by masculinity being defined as physically and emotionally strong as well as overtly superior. The fact that I do not dedicate myself to this issue does not mean that I do not recognize this, but merely that I have chosen a different focus.

What is a „woman“ anyways?

The term woman* is quite ambiguous. I consider gender as a social, not a natural category. That’s why using the word „woman“ I refer to people who define themselves as such – no matter what kind of genitalia they have or what their passport says. To emphasize this perspective on gender as something being constantly under construction by society, I mark terms representing the traditional gender binary – male, female, man, woman, girl, boy – with „*“. However, an in depth discussion of trans*identity and the associated forms of discrimination and marginalization are not explicit topics of this blog.

Why is the language used on FILMLÖWIN not always gender neutral?

I am working on using gender-neutral language which is way more difficult in German than it is in English. At the same time I would like to ask all readers for forbearance. I am doing my best, but I’m still learning! Whether reading or writing: gender-neutral language is a matter of practice. The more we practice, the less it strikes us as awkward and the more natural it feels.

I am interested in an honest, but also respectful exchange with my readers. On the internet, people tend to be more straight forward with each other, not necessarily more sincere but rather cruel. They formulate their opinions aggressively just for the sake of the argument and don’t care about other people getting hurt. I’m distancing myself outspokenly from the „Google is God“-politics of many websites (every comment improves the Google ranking and is therefore desirable, no matter what it says). My personal „comment policy“ is not censoring of critical opinions, but advertising a respectful discussion culture in which no one has to fear abuse or insults. If you, dear reader, find a comment unsuitable to these ideas, please let me know and write me an email to sophie@filmloewin.de.

FILMLÖWIN is a project by Sophie Charlotte Rieger, freelance journalist, film critic and feminist activist. A detailed bio and information on other projects can be found here.